After selling Stagecoach in April of 2017, Jan and Bart Krupp looked to purchase a new winery and evaluated the benefits of purchasing Kitchak Cellars. One of the facility’s selling points was that it was permitted to produce more wine. Looking for a professional evaluation of the facility, they engaged Nordby Construction to offer further insight into their prospective investment. Jan says, “When I spoke with Craig, he was thorough in looking at the facility. He was not the cheapest, but customers found they could trust him.” 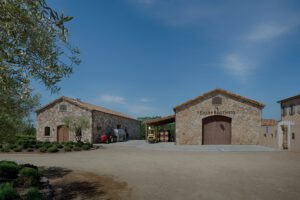 Engaging Nordby Construction Services, the Krupp Brothers continued their due diligence. They found the Kitchak production building served two purposes.  The facility contained seven small tanks, which were dedicated to fermentation, and there was an area dedicated to case and barrel storage. Through the evaluation, the Krupps identified an opportunity to reconfigure the space so that they could more than double the winery’s production.

With recent sale of Stagecoach, the Krupps had the means to transform the former Kitchak Cellars into a state-of-the-art winery facility. Once purchased, Jan Krupp wanted to clear everything out of the building and configure the space to be solely dedicated to fermentation.

When the space was clear, the Nordby Construction Services team built new trench drains and sloped epoxy floors. A total of 18 automated fermentation tanks were installed, which allows for a production increase from 2000 to 6000 cases. Square tanks were selected to further optimizing the use of space. Facility systems are now outfitted with a new refrigeration system with all new control devices that are connected to new automated fermentation tanks that are operating with new solar power. All operations are now illuminated with LED lighting.

Each fermentation tank has its own pumps and hoses, cutting the need to change hoses between tanks and mitigating the chance for error and bacterial contamination. Facility managers can now monitor the process through a building management system, accessible via desktop computer or mobile device. In effect, the new equipment allows the wines to be more pristine and easier to make. The new facility is also equipped with a new optical stemmer, requiring less labor. The prior winery would require 10 to 14 people to run production.  Optical stemmer only requires about 4 people. 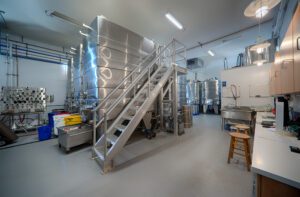 Facilitating a Facility Reconfiguration in 5 Months

Jan purchased the property March 2017 and wanted to be ready for harvest in August.  To get a sense of the project timeline, Nordby Construction Services president, Tony Simmons, says, “We had a little over 5 months to get the design complete, project permitted and construction complete.”  Together the team had to pull together to meet the challenge.

Nordby teamed up with Mary Sikes & Associates, the architect who designed all on-site buildings. Together, we evaluated the winery site and the uses to come up with the most effective plan to address operational flows, productivity and accessibility.   Tony said, “Mary did a great job expediting the plans and worked with the building department to get it permitted.”

The rest was left up to the Nordby team. They had crews working 10 to 12 hour days and weekends to complete the project by harvest. Like most winery reconfiguration winery projects, there were unexpected hurdles. Tony Simmons added, “Nordby’s site superintendent, Troy Llopis, orchestrated the project with experience.  Troy was able to promptly and effectively address these concerns with Jan to keep the project moving forward.” 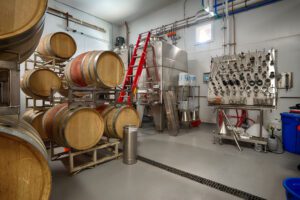 According to Jan, “I was impressed with how smooth the whole process ran. Tony and his team were able to solve whatever things came up. For me, that was the best part of the process. The Nordby team could handle it smoothly.”

Did this story pique your interest in the Krupp Brothers Winery?  They have two venues in the Napa Valley. A  downtown tasting room, where visitors can drop in to enjoy a casual tasting or relax with a glass of wine. To visit their winery and estate, schedule an appointment for a tour of the vineyard and winery and a tasting including our most limited wines.